This post is somewhat of a continuation of my post with the B-47 in it.  This will be an inside look at the Plattsburgh Air Force Base Museum.

The musuem sits across from the Battle of Plattsburgh Museum, which is also situated on the old Air Force base.

As stated in my post with the B-47 in it, the entrance fee to the museum is $2.  Two dollars does not get you an awful lot these days; but in this case, two dollars gets you quite a bit.

I believe the museum has only been in operation since the start of this year and is staffed by volunteers, one of them being an ex-Air Force maintenance officer.

They have a fairly decent collection of memorabilia on display, all of which is situated in one main room of the building.

Knowing that there was once Atlas missiles siloed on the Air Force base was very sobering indeed.  I suppose it gave me pause because i live in Canada and i have never had nuclear missiles that could wipe out cities, buried in my backyard.

Not only would it be slightly disconcerting to have these missiles in my backyard, but it would be even more so knowing that I would have been an obvious first strike target of a Russian missile.  I’m not sure how the people of Plattsburgh got in with a normal life. 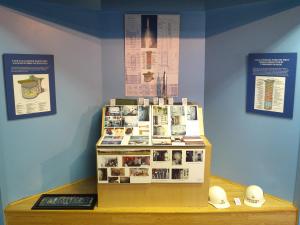 Plattsburgh was the home of the SM-65F Atlas missile, which had a W-38 warhead with a yield of 3.75 Megatons.  The Fat Man nuclear weapon that was dropped on Nagasaki, had a yield of 21 kilotons.  Therefore, one Atlas missile was equal to about 178 Fat Man devices.

In the Nagasaki bombing, 35-40 thousand people were killed instantaneously by Fat Man.  Just imagine what an Atlas missile could have done… 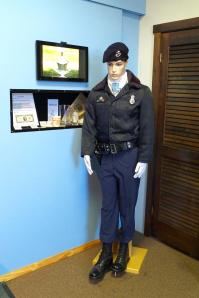 This little museum certainly brings you back to the Cold War era and brings an appreciation for the service members who stood guard against an imminent threat.

On our trip down to Plattsburgh, NY, we visited the Battle of Plattsburgh Museum, which is situated on the old Plattsburgh Air Force Base.

It’s not a very big museum, but it effectively tells you the history of the Battle of Plattsburgh, which occurred on Septemeber 11th, 1814 and is known as the decisive  battle of the War of 1812. 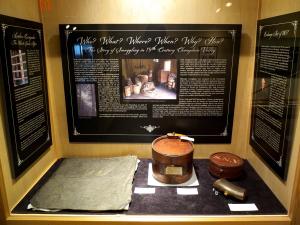 There is no entrance fee to the museum; though, i do suggest you either make a small donation or buy a souvenir in the museum shop.  It’s a worthwhile venture to support. 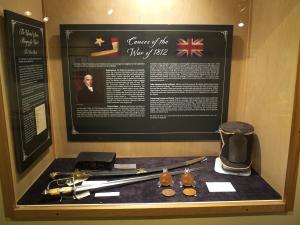 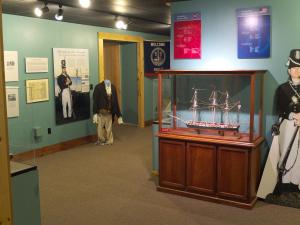 The museum visit starts off with a short, 8 minute film about the Battle of Plattsburgh.  From there, you are free to explore the museum at your own leisure.

I took these photos with my X10 because i did not think the 35mm would be wide enough for the small confines of the museum.  Though, come to think of it, i think i would have done just fine with it.

The X10 does okay in low light, but noise really starts to stand out at ISO 800.

I have not really experimented with the noise reduction feature of the X10 yet, so i think that will be a little side project that i will have to do. 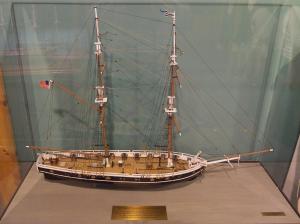 For such a small museum, they certainly have a decent collection.  Everything is well explained with informative plaques and there is always someone there to ask questions to. 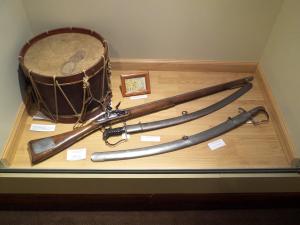 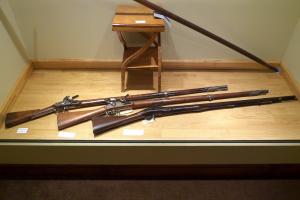 The museum store is nice and has a good variety of books, mugs, stickers, DVDs, etc. to chose from.  Personally, i bought a nice mug, hat and a sticker. 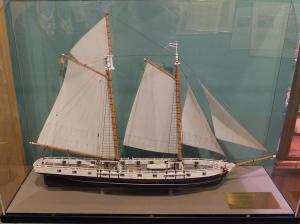 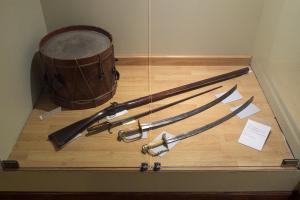 If you enjoy history and are keen in learning about an important battle from the war of 1812, this is the place to go.

One of the attractions in Plattsburgh, NY, is the old Air Force base.  There is not to much to see now except a few old buildings, but it is home to two museums, one being the Plattsburgh Air Force Museum.

The museum only just started up and needs all the support it can get.  It resides in one of the old base buildings and is staffed by some volunteers.  The gentleman that was volunteering the day we went, actually served on the base as a maintenance officer for the FB-111As that were once stationed at the base.

The entrance fee is $2, which is extremely economical compared to other museums i have been to.  If you can, make a donation as well.  Preserving the memory of the base is something very important.  Before it closed down in the late 1990s, it was a huge economic factor in Plattsburgh.  I am sure that there a many people still living in Plattsburgh who have fond memories of the base, either as a civilian employee or a service member.

Fortunately for aircraft buffs like myself, there is still one Boeing B-47 remaining at the AFB, albeit inoperable.

It sits as a gate guard, along with one of the FB-111As that was also stationed at the AFB. 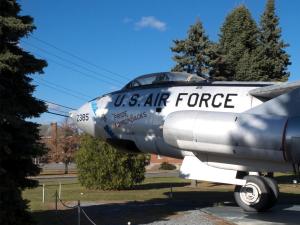 By the looks of it, this aircraft has been sitting here for quite some time.  Cold, snowy, New York Winters and rainfall have sure taken a toll on it. 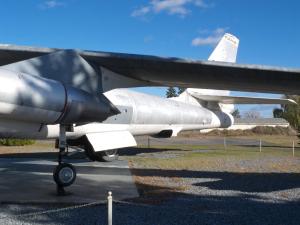 There is a small chain fence around the perimeter of the aircraft and should be respected unless otherwise told. This aircraft is at least 54 years old, if not older and the last thing it needs, is people trying to climb on top of it. 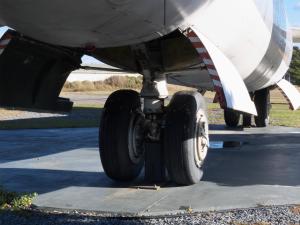 It was quite impressive to see and to think that this aircraft carried nuclear payloads during the Cold War, was somewhat of a sobering thought.

As you can see, the two 20mm cannons have been removed from this aircraft.

If you ever go down to Plattsburgh, NY, take the time to visit the Plattsburgh Air Force Base Museum.  It’s only two bucks to get in and have an inside look at a very interesting part of history.

Furthermore, you would  also be supporting an effort to preserve a part of the local history, one that was very important to the town of Plattsburgh.

When i talk about taking a photo of a street, i mean like this: 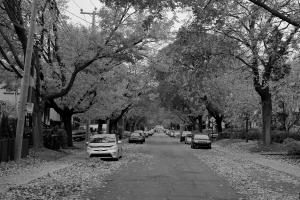 With the above photo, i am standing in the middle of the road to really show off those converging lines and that is what i like about this type of photo.

Obviously, i don’t advise anyone do to this type of photography on a busy street.  Please don’t put yourself or others at danger.  Find a quite side street, preferably a one way street, and plant yourself in the middle.  I think you will like the converging lines just like i do.

If you can’t make it to the middle of the street safely, you are left to taking the photo from the side of the road:

My initial idea was to go down to Old Montreal where there are all sorts of little side streets, but my daughter was not in the mood to go out.  Therefore, i did these photos in and around my neighborhood. 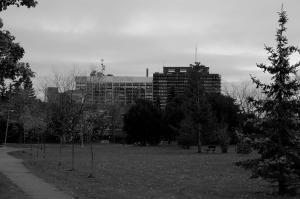 I like to have contrasty greyscale photos with dramatic skies; therefore, i am trying to see which filter gives the best results in those regards, red or green.

I shot all these photos in RAW on the X-Pro1, so i can also make color renditions of them or do whatever i like to them.  I am really liking shooting in RAW now. 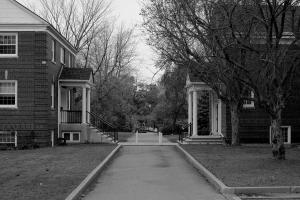 As i said before, i really like the converging lines that appear in some of these photos.  I would also like to experiment with diverging lines as well.  In photography, you have to keep experimenting or you will never know.

It’s amazing how fast Summer went by and now we are in the month of November.   For me, Halloween is somewhat of the divider between Fall and Winter.  Many of the leaves have turned & fallen already and the air has a bit of bite to it in the morning.

As we have done each Halloween, we took our daughter out for trick or treating.  The nice thing about our neighborhood, is the fact that we don’t have to go far to come away with a good haul of sweets. As i did last year, i used my X10 to take photos on Halloween night.  The reason for this: it has a flash.  I am looking at getting a flash for my X-Pro1 and have been looking hard at Fuji’s offerings.

However, Nissin have recently announced that they will be coming out with a Fuji version of their new i40.  Though, last i heard, it is somewhat delayed.

Despite me not being able to use my X-Pro1 to do these shots, the X10 did not disappoint once again.

The final results were somewhat brighter then i liked, so i brought down the overall brightness of the scene in NX2.

Despite the fact that i did not have a fully charged battery in the camera, the battery latest for all 40 shots that i took.  That is pretty decent considering i was using the back LCD to compose my shots and the flash was used on each photo. At the start of the night, i put my lens hood on.  After a few shots, it came right off.  I took it off, because on the first couple of photos i took, i noticed a semi-circular shadow in the corner of each frame.

This black cat was hard to get focus on with the X10’s contrast detect auto-focus system.  Since the cat is all one “color”, black, the auto-focus system can’t lock on without any variation in the color.  Therefore, i focused on the car port behind the cat and recomposed.  It seems to have done the job. It was a fun night as always and my daughter came away with 4 bags of goodies.  Once again, the X10 did not disappoint and came through to give some pretty nice photos from this years Halloween night. As always, have nice day.